We have known each other one week now and I thought I would write a bit about our new daughter - her personality, how it's going so far, and a bit about her history and special need. When I return home and have access to my referral photos and other photos we received during our year long adoption process, I will write a post to tell the story of how God found this little girl for our family and how we came to adopt her.

So far, I think we are doing quite well. She has bonded with me from the start - tho that's not to say that she hasn't acted difficult for me at times in a testing sort of way. She is a bit afraid of John still which is something you can all pray about. We know that, typically, adopted kids will often choose one parent to bond to at first on the adoption trip and that this happens often. With our other daughters, they bonded one to each of us so we didn't quite experience this in the same way - we each had one and that was actually easier at first. Within a few weeks they were ok with both of us.

John has taken it all in stride and knows she will adore him soon enough (and if she's like the others, she will). But I know it is hard on him and it's sad for me. So some prayers on this would be great - that she warm up soon. She is great with the big kids and gets very silly and giggly with them. She loves to look at our photos of the family and run through imitating everyone's names (including Jemila and Kulate) - tho she still shakes her head when we get to "Baba" (Daddy).

She is bright and curious, strong and smiley. She is stocky and sturdy with a beautiful face and contagious laugh. She is learning how to count and say "thank you" "please," and "more" in sign and English. She uses the word "potty" now. She sweats a lot (?) and is very active (jumping every step and wanting to jump up on anything she can). She is at once mature acting, chattering away with tons of expressions in Chinese (she speaks a dialect of Mandarin), and then suddenly like a toddler, whining and communicating in a babyish sing-songy baby whine. She is a bit headstrong and I hate to say it...bratty at times. She gives lots of eye contact (a great thing) but uses her little pout often.

She is funny and likes to tease, ornery at times and a bit of a princess (I think she must have been quite babied in her foster home). She likes hugs and is beginning to like kisses (we were told the children here are snuggled but not kissed), and she loves to share whispers, and hold hands.

She likes music and cartoons, and eating (everything!) and hot tea. She cradles her baby doll and stuffed bunny, jumps on the bed, and doesn't appear to be afraid of much at all. She is learning to listen to books and wearing dresses and skirts seems new to her but she is getting used to them. She refuses any hair bows or headbands (whips it right out of her hair) and LOVES her new pink sneakers. (Update - she has kept a little hair bow on for the last hour with the bribe of a lollipop! This mom likes headbands and hair bows so we will be working on this!)

Being an older child already classifies Mia Ting as a special needs child. Her additional special need was listed as mild Cerebral Palsy when we first reviewed her files. She was described as developmentally and physically ok but with mild speech delays. Upon further study of her medical info by John and I (we are both medical field people) and two international adoption medical specialists, it was obvious that her need was not CP but hydrocephalus.

Hydrocephalus is an accumulation of cerebral spinal fluid in the ventricles of the brain. It is caused by trauma, infection or congenital blockage. If caught before the skull plates fix (around 15 months of age) a shunt can be surgically placed in the ventricle to shunt away the fluid to the abdomen thus allowing the skull to fuse correctly. Mia's head measurements were large when she was found at one week of age...and she never had the opportunity for surgery.

An early CAT scan showed hydrocephalus as do her head circumference measurements over the years. A CAT scan done later showed the hydrocephalus resolved on its own but not before leaving her with a poorly shaped and larger than normal head circumference. In many cases if left untreated hydrocephalus causes brain damage and when we accepted her referral we were very aware that this could be the case. To us, she seems remarkably intact physically and mentally...just delayed due to environment and being babied. Praise God! Tho' there are still many unknowns and probably an MRI in our future to determine that she does not have any remaining fluid or abnormalities.

Her photos do not show it, but when you meet her you will notice her larger forehead, abnormally shaped head (this will probably only be noticeable at the pool - her hair hides it!), and the two prominent "bumps" on either side of her forehead. These bumps (imagine an "egg" that rises after a child bumps their head) are a common finding in kids with hydrocephalus. Unfortunately because they stick out, they have gotten the brunt of any falls and are quite scarred.

We have read only positive information from other families who have adopted children with this medical condition and pray Mia's situation will also be one that will (other than cosmetically) not hinder her development and life.

And now for a whole bunch of just adorable photos of our new daughter... 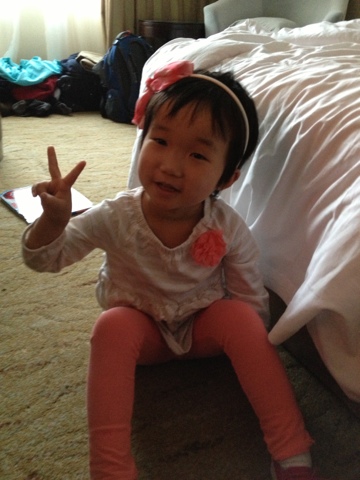 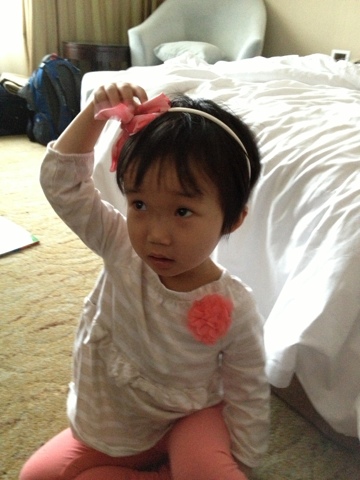 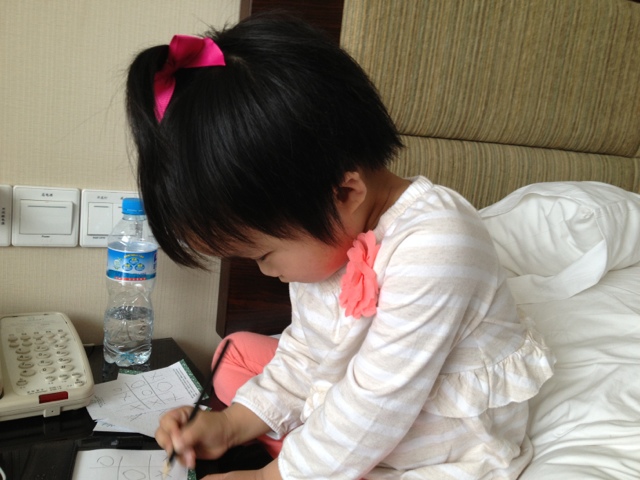 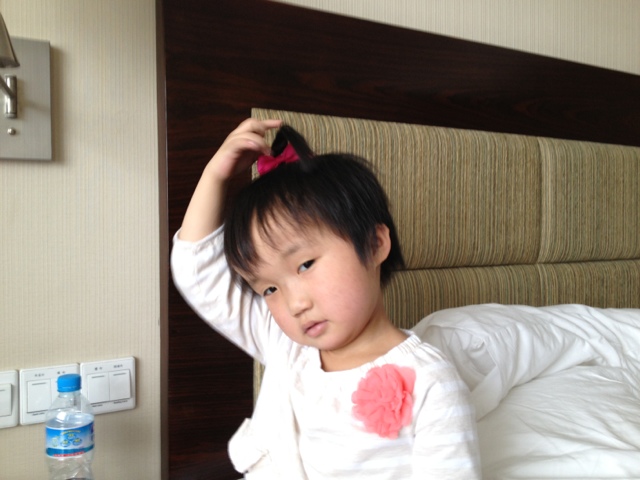 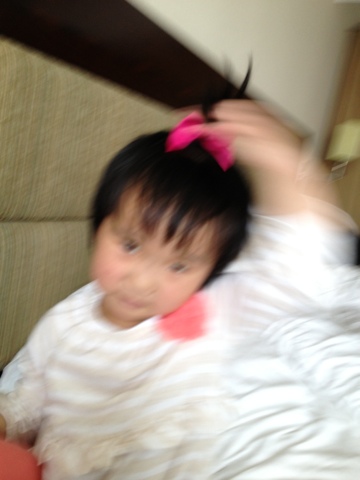 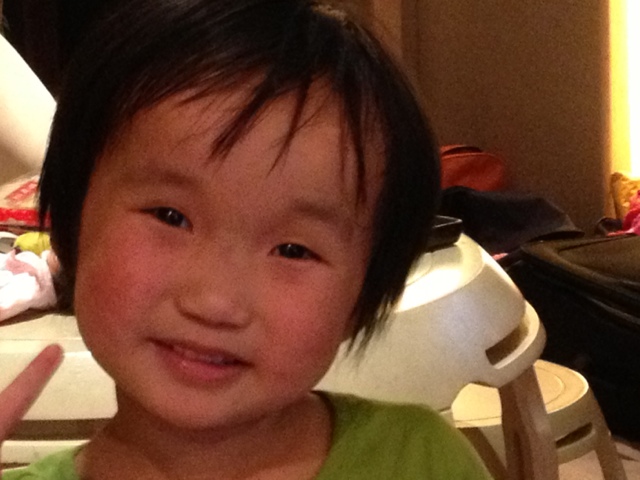 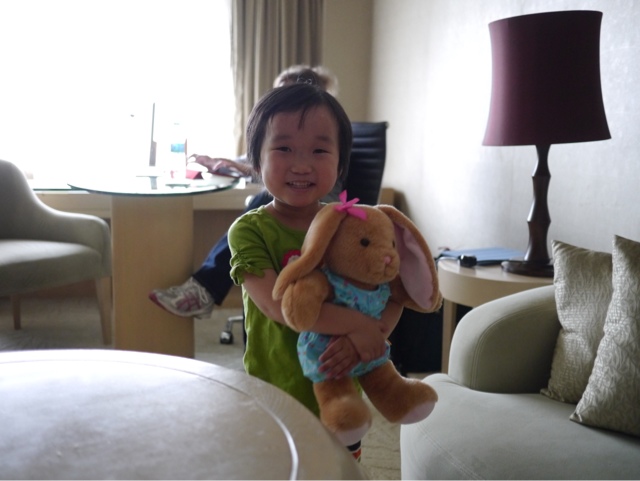 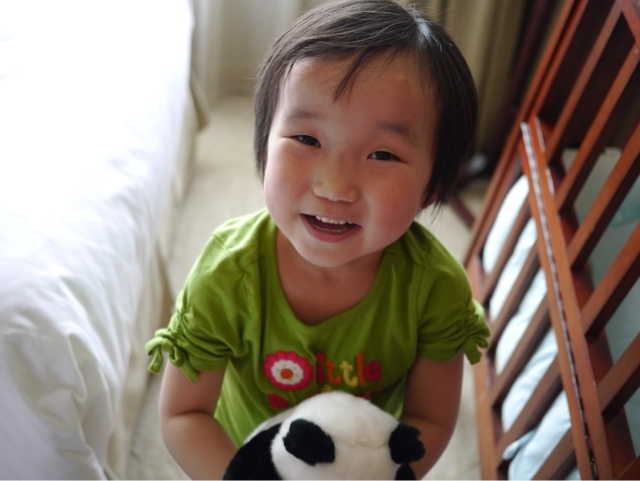 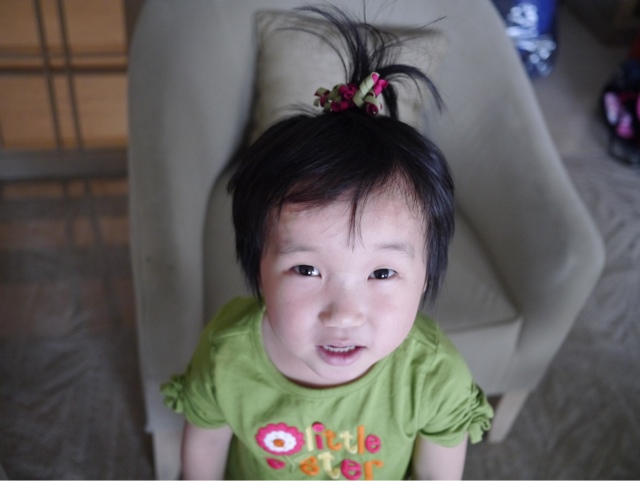 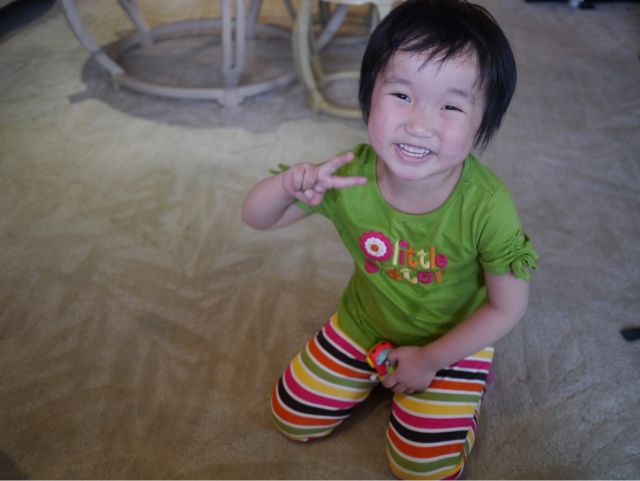 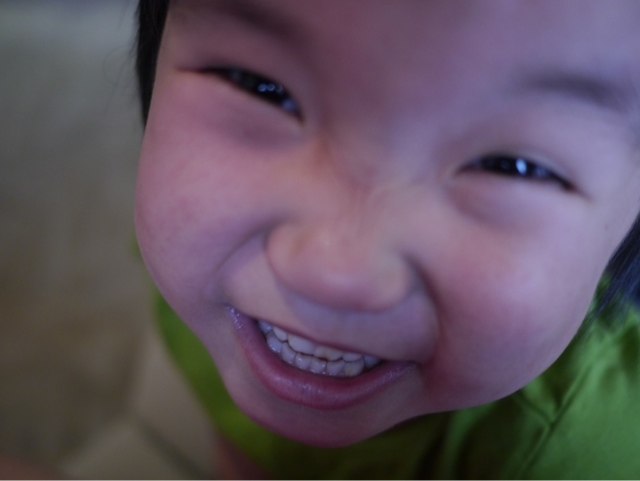 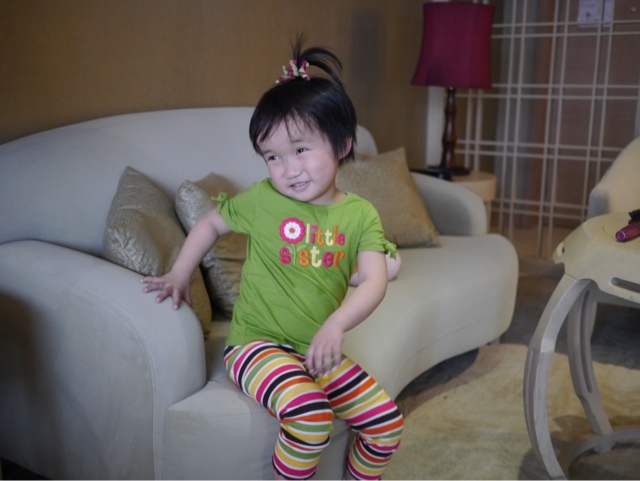 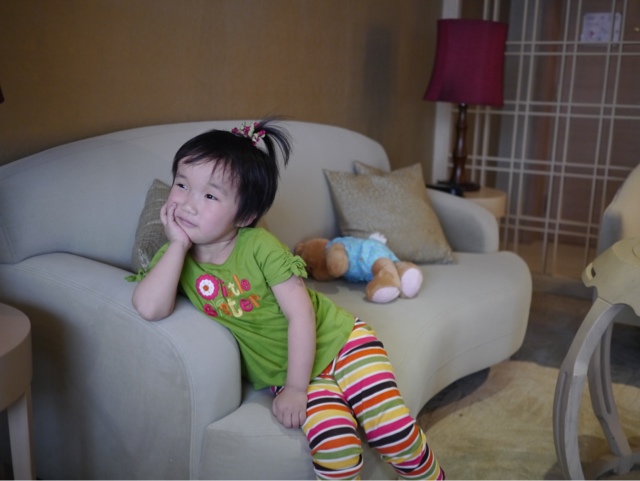 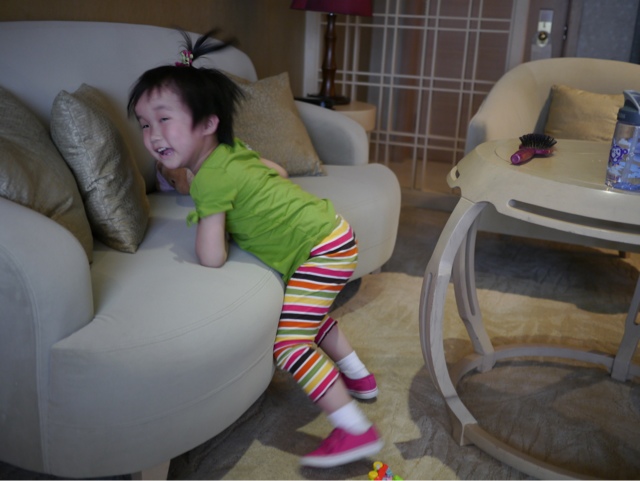 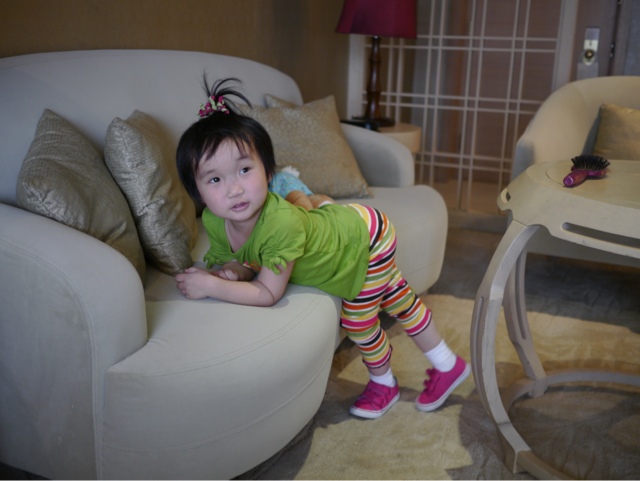 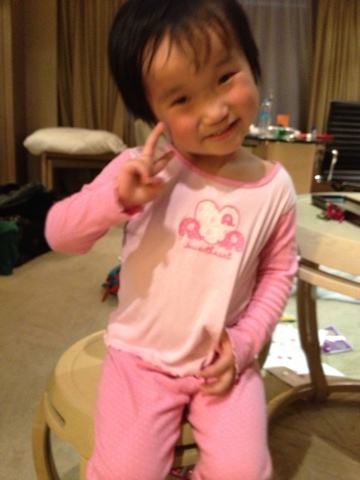 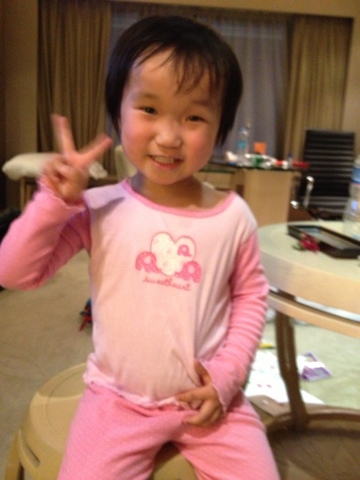 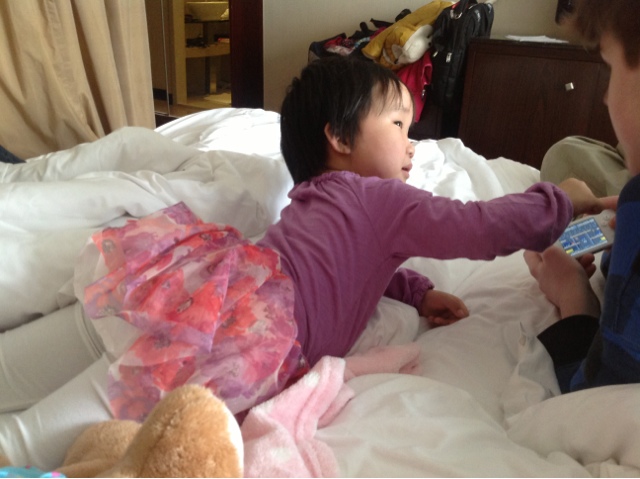 Hi Julie,
I've loved following along on your journey and seeing China again. Your new baby is precious! Wishing you all the best as you finish up your trip and head home.
Your friend,
Amanda
apower-richwithlove.blogspot.com

Julie! How wonderful! Thank you for sharing and I'm so excited for you all!

Julie
Wife to my best-friend, John, mom to 7 amazing, fantastic, and incredible blessings (4 bio kids, 2 beauties adopted from Ethiopia in 2009, and one princess adopted from China in 2013). Join us in our joys and struggles as we strive to live for Jesus, until we see Him face to face.